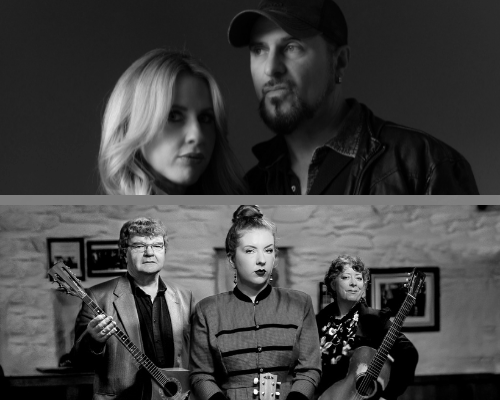 Join us on Sunday 3rd of July to celebrate American Independence with two of Ireland’s best Americana bands – The Remedy Club and Greenshine!

Find out more about each act below

Husband and wife duo The Remedy Club, comprising KJ McEvoy and singer Aileen Mythen have been
described as ‘Ireland’s best kept musical secret’ by HOTPRESS journalist Jackie Hayden, who also
described their music as “a marriage of folk and country with a hint of the blues with delicious harmonies
and nimble guitar playing’’. Their latest critically acclaimed album ‘True Hand True Heart’ has been
gaining them a lot of new fans around the globe.
The album was recorded in Room and Board studios, Nashville and produced by 5 – time Grammy
award winner Ray Kennedy (Steve Earle, Lucinda Williams). It hosts an array of Nashville based
stalwarts including Lex Price on bass (Neko Case, KD Lang), Lynn Williams on drums (The Wallflowers,
Delbert McClinton) and multi-instrumentalist and Rodney Crowell’s go to musician, Rory Hoffman. The
album has been receiving wonderful reviews across the board including being chosen as album of the
week on RTE Radio One. They have been described as ‘One of the most exciting European acts around
right now’ (Slim Chance, Netherlands), ‘Among today’s top roots artists’ (Your life in a song, UK) and ‘a
brooding masterclass in Americana from Wexford to Nashville and one that you’re well advised to investigate’ (Lonesome Highway).

Greenshine is a Cork based trio consisting of Mary Greene, Noel Shine and their daughter Ellie. Their songs have featured on Irish airwaves for many years and their tracks have travelled far beyond their homeland and into the waiting ears of music lovers worldwide.
Greenshine’s music straddles the boundaries of Folk, Indie and Americana with intertwining harmonies,
skillful stringwork and critically acclaimed songwriting. They are frequently included on RTE Radio 1’s
Recommends List and several of their songs have reached No.1 on the station’s Airplay Chart including
Dandelion Seed and The Good is Gone, with their single ‘THE GIRL IN THE LAVENDER DRESS’ being the 2nd most played Irish song on RTE for the year of its release. In Spring, Greenshine released their single ‘BLUE VELVET’ for Ukraine to raise funds for the Irish Red Cross Ukraine Crisis Appeal and this single too reached the #1 spot. Noel, Mary and Ellie have appeared on the recordings of multiple artists including Christy Moore, The Republic of Loose, Declan Sinnott and John Spillane. Their original material has featured in a variety of national ad campaigns, film and radio signature tunes. The band is currently working on their new album and a series of singles.
Check out www.greenshine.bandcamp.com to hear the full array of Greenshine’s music.
“The Sound of a Family immersed in music, tight in harmony, in love with song. Shine on Greenshine,” –
Christy Moore.